Viterbo: hub of the Tuscia region

Are you familiar with the wheel of a bicycle? Surely yes, since you are visiting the site of “Passione a Pedali”! Well, imagine the territory of the province of Viterbo: This city is the hub and from there the most varied itineraries are unraveled, along the spokes of the wheel.

Talking about the hub; Viterbo is a city known for its astonishing Papal Palace; that’s why the city is called the Papal City. It is the largest and best preserved medieval historical center of Italy with picturesque neighborhoods such as San Pellegrino and Pianoscarano. It is also known for its thermal area, its archaeological sites all around the city, and also for a food and wine tradition. 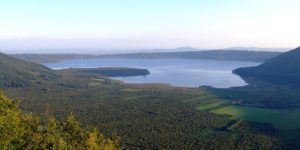 Heading South – East in the direction of Rome you reach the historical Via Amerina; a medieval path that still connects Rome to the Umbria region and the “Forre of Corchiano” which is a valley crossed by etruscan carved roads. Not far from there you find the volcanic Lake of Vico, surrounded by beech and chestnut trees that belong to an intact protected area also known as the nature reserve of Lake Vico and Monti Cimini.

Palazzo Farnese in Caprarola, a must-see, showcases the splendor of the Farnese family, the original inhabitants of this gorgeous 16th century palace, and now a prestigious location for many famous films such as the TV series The Borgias with Jeremy Irons and the movie Operation U.N.C.L.E. by Guy Ritchie.

Speaking of film scenarios, the Renaissance gardens of Villa Lante and “Il Parco dei Mostri” (the park of monsters) located respectively in the villages of Bagnaia and Bomarzo, are two unique locations that served as the background during some scenes of the TV series The Young Pope with Jude Law and Diane Keaton, Villa Lante, and the movie A Midsummer Night’s Dream directed by Michael Hoffman, “Il Parco dei Mostri”. These gardens are two sides of the same coin; Villa Lante shows an elegant combination of art and nature with its fountains set in a beautiful Italian garden. “Il Parco dei Mostri” also known as “Sacro Bosco” (the sacred forest) is instead a park where weird creatures made of stone will welcome you to give you a magical experience. 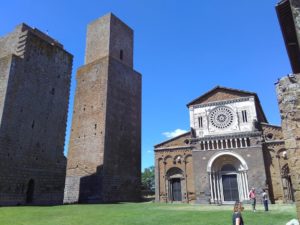 We go now to the South-West towards the Etruscan necropolis of Castel D’Asso, until you reach the wonderful city of Tarquinia, with its Etruscan necropolis heritage of UNESCO. On the same spoke the village of Tuscania with its Romanesque churches deserves a visit, also to taste some olive oil locally produced.

Going North, following the pilgrim way “Via Francigena” you can easily reach the Lake of Bolsena, the largest volcanic lake in Europe. On its banks there are fishermen’s villages of rare beauty, perfectly preserved in their characteristics that offer a taste of an ancient and traditional cuisine such as the fish soup of the lake called “sbroscia” flavored with mint.

And then, we can’t forget to mention the marvelous wines of the area, produced with grapes cultivated on volcanic soil: the Est Est Est in primis, but then also the Grechetto, the Aleatico and La Cannaiola.

Not far from the lake we can find other locations that are acquiring an international resonance: Civita di Bagnoregio, better known as the Dying City and the Valle dei Calanchi. But also the less known but fascinating Valle della Vezza, dominated by another ancient village: Vitorchiano, and from there the pass for Corviano, a wonderful and unknown canyon.

Welcome to Tuscia! So much to discover!